The title is a bit misleading — a week is hardly enough for Tunis let alone the whole country.  We spent the entire time in the Tunis area because Rayma became sick from something she ate (I still provided great bedside care!). However, until she is back and up and able to write the more ‘insightful, thoughtful, and romantic’ posts, you’re stuck with my rapid roll call of how I survived on my own…

Breakfast at Le Chambre Bleue (where we were staying)….

Fresh fig, pomegranate, and quince jams, ricotta cheese for topping your pancakes, couscous mixed with pomegranate, honey, and mint, and tomatoes in olive oil and basil. I’ve been trying to convince Rayma that it was a struggle to get out of bed daily for this…

Sights:  The first couple days, I just wandered about the city and the old souk. 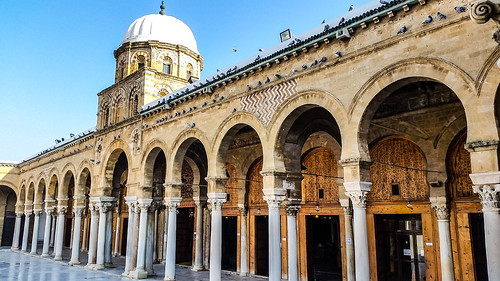 The city is a walking museum. The biggest site is the Ez-Zitouna Mosque was built at the turn of the 6th-7th century making it one of the oldest in the world. Pretty cool design in that it used old ruins from the city of Carthage (which I thought was just a mythological city like Timbuktu…). 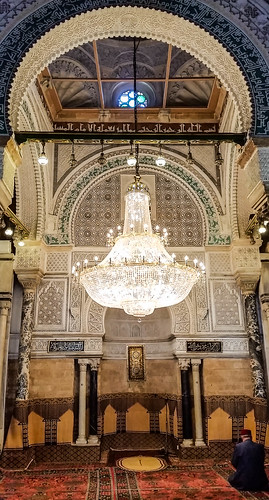 Apparently a lot of Sufi mystics studied at this mosque when it was a university as well, and the designs were the inspiration for a lot of the architecture in southern Spain. 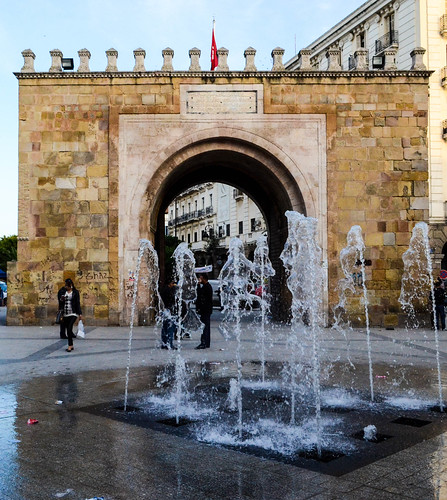 This archway was at the end of the old Medina and then leading into the ‘new city’ which as built by the French. It was the square and street where they had their Arab Spring.

My crew and dedicated spots: 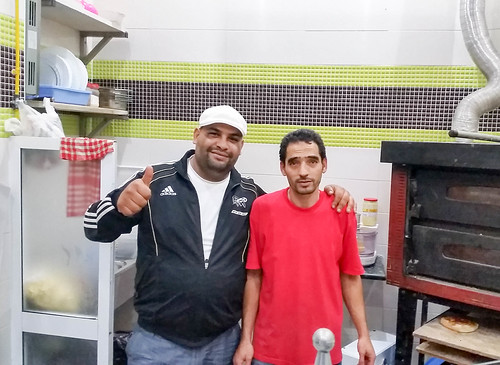 Dinner: The guy in the red shirt is Moaz and I called the other guy Big Pun (I couldn’t pronounce his name…).  Each night, I’d head over to their cafe and they’d make me a Makloub Escalope (imagine a cross between a Calzone and a Shawarma) for dinner… 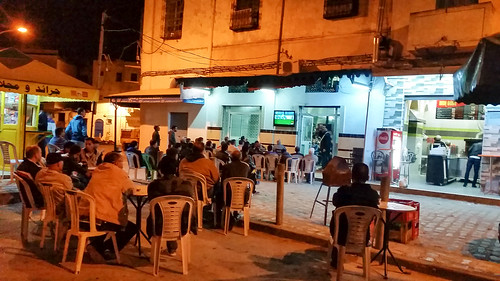 Entertainment: They didn’t speak much English and my French sucks (foiled again!) so conversation was light… but I was lucky one night that they invited me to come watch the Tunisia-Egypt CAF match which they were showing on a ‘big screen’ outside their cafe. The beautiful game. 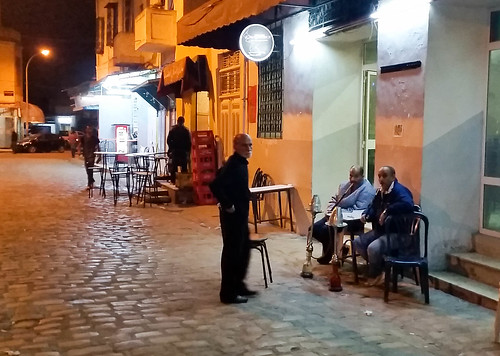 Other nights, I’d be in the ‘hood’ for mint tea and cards — one of the guys had a son that was studying in Montreal so he was asking what it was like.  It was 18C at night in Tunis and he thought it was cold and so he had no desire to go see his son in Montreal (hard to argue…) 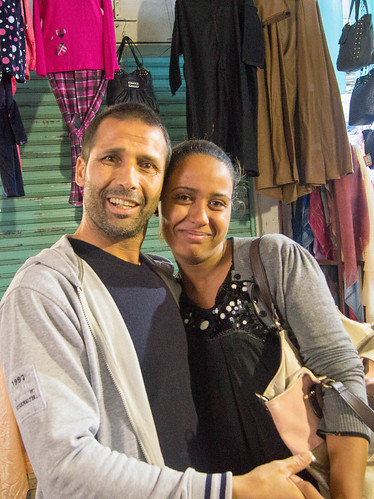 The rest of the time, I just wandered the streets drinking mint tea, taking photos of all the pretty doors, and eating way too much food.

Rayma was feeling better on the last day, so we had a chance to check out the central market. To get there, you walk up a big boulevard that is part of ‘new Tunisia’ which is lined with trees and was where the Arab Spring protests were. Every night, it seems like a million sparrows all return to the trees on the street for the night and chirp incessantly — Imagine an Alfred Hitchcock horror… no exaggeration… and we seemed to be the only people noticing it. 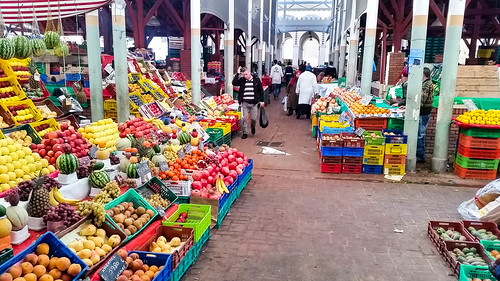 The market was impressive – I don’t think I’ve ever seen a fresh food market this big. Imagine the biggest Loblaws or Fortinos, and times it by 4. It was insane how much great food they had in this place for fruits/veggies, Fish, meat, cheese – you name it, and they had it, all locally produced.

And then it seems like it is normal across Tunisia for people to buy fish fresh from a market and grill it right there at the venue — we sat down at this one shop at the market to just eat hummus and chips, and a gentleman insisted that we take one of his fish that he had grilled. I think he thought that we arrived too late after the fish market closed. He wouldn’t say no, so we ended up having an amazing fish dinner with them. 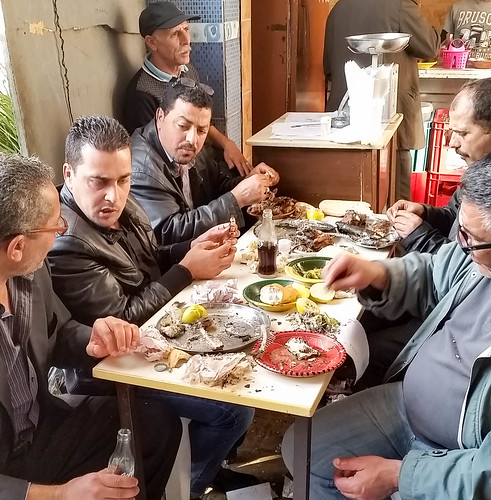 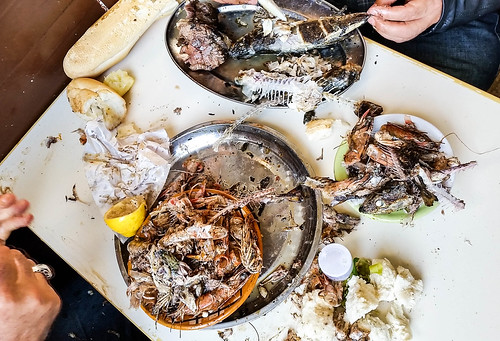 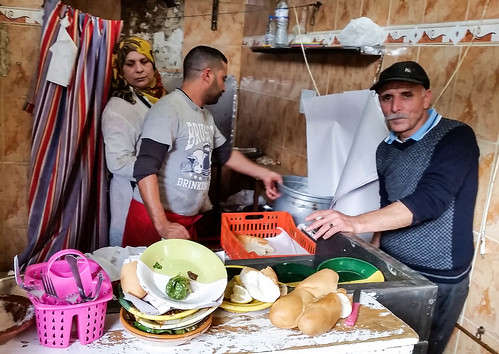 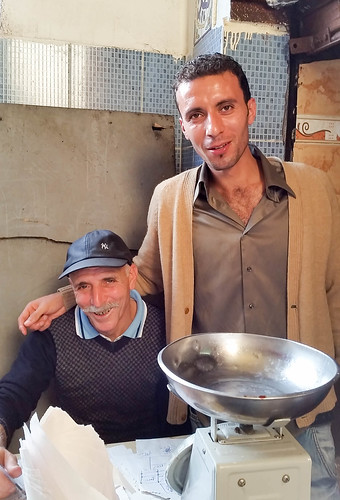 I ended up having a great time in Tunis — I prefer staying in places longer and getting to know people and the culture as opposed to quick stops and then moving on to see the next sight. Definitely a lot to see in Tunisia (Roman and Fatimid ruins, beaches, Star Wars movie sets) but we’ll come back for those!